Our local train service — a time for reckoning 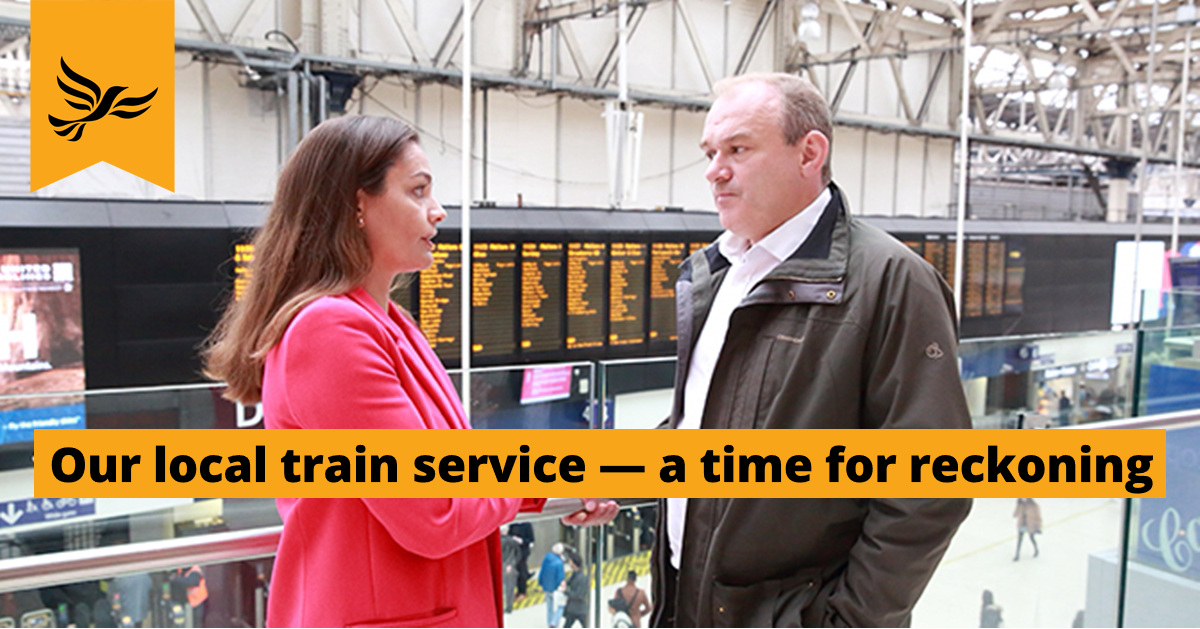 The election may have come and gone, but our train services remain as bad as ever. Some passengers joked to me that they’d hardly noticed the recent strike action – the services just seemed as bad as ever. But it isn’t really a joke.

You’ve probably seen the speculation that things have got so bad that our local franchise — the south western franchise — may even be nationalised.

Filings to Companies House of the accounts of South Western Railway (SWR), the operator of the south western rail franchise, published in early January, contained a Directors’ Statement that there is “material uncertainty that may cast significant doubt on the company’s ability to continue as a going concern”.

The accounts showed SWR lost £137 million in the year to March 2019. And this has inevitably led to widespread speculation that SWR may go bust by the end of 2020, and that the Government may be making plans to renationalise this franchise.

Press reports suggest the firm has been in talks with the Department for Transport (DfT) and the directors are reported as saying that there are two potential outcomes of the talks: giving the company a revised, short-term contract; or seeing it kicked out within the next 12 months in favour of a publicly owned operator.

This came as no surprise to me.

After campaigning for improvements after SWR’s disastrous first year, and after many meetings and having formed a special cross-party group in Parliament to hold an inquiry, I published a report in December 2018, “Passengers Must Come First”.

In it, I specifically warned that, in my opinion, having spoken to key insiders, the franchise was not financially viable.

"SWR’s franchise bid was unrealistically low. Having underbid, SWR is now caught in a trap of having to put a floor under investor losses whilst needing funds to tackle basic investment needs. This is totally unsustainable."

“Ministers have 2 basic choices for SWR.

"Either they must decide to replace SWR, with a new operator. This would, at least initially, have to be a government-controlled company, before deciding on any future re-franchising.

"Or they must impose a new contract on SWR, preferably performance-related, where SWR take a significant financial hit and can only begin to earn profits, once performance for passengers has improved.

"The status quo is simply not acceptable: passengers have lost trust in the current franchise and the current management to deliver.”

I met the then Rail Minister early in 2019, and I handed him my report. He told me improvements were occurring and my conclusions were wrong.

So I’m back again, and making the same points — though this time, I think Ministers will have no choice but to listen. This rail franchise is collapsing before their eyes. And the responsibility of the Department of Transport and of former Ministers like Chris Grayling for these problems can no longer be evaded.

Once again, I’ll try to work cross-party, to increase the pressure and accountability. And I’ll be working with Munira Wilson, the new Lib Dem MP for Twickenham. And Sarah Olney, the new Lib Dem MP for Richmond Park and North Kingston. As well as Siobhan Benita (picture left), the Lib Dem candidate for Mayor — and a New Malden resident!

I’m assembling an even more powerful campaign, so this time, the Government has to listen.

The simplest and best solution would be to ask Transport for London (TfL) to take over the franchise, at least for the next few years. TfL have a relatively positive performance running overground trains across London, with particular expertise in suburban networks like ours. I’ve discussed this idea with Siobhan Benita, and we have confidence TfL can manage the wider SWR service outside London too.

Longer term, we need to see our franchise in the context of an industry-wide reform, as franchises across the UK have been failing — from Virgin’s East Coast mainline to Northern Rail.

The Williams Rail Review — a major study of the UK’s railway industry commissioned back in September 2018 — is due to be published soon, which should kickstart a proper debate about more radical reform of our railways.

We may be about to start the next round of Brexit negotiations. They will no doubt dominate this year’s politics, just as they did in 2019. But in 2020, let’s hope we see the beginning of the end of the shameful train services local people have endured for the last three years.

First published in the Berrylands Companion in January 2020.