Making Kingston Better, Together: Lessons from Reykjavik, Calgary and Detroit 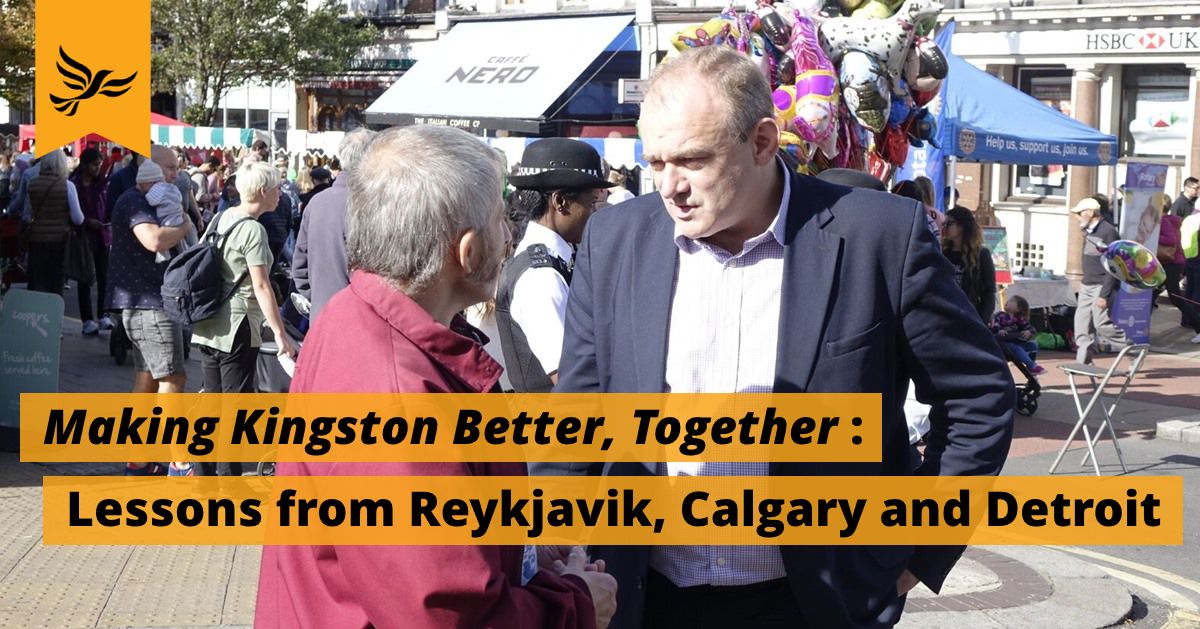 Ed recently wrote an article for Berrylands Companion magazine about how local community groups can get involved with delivering improvements and have a say locally.

I’ve been looking at new ideas for giving people a bigger say and role in what happens in our area.

You might say, that’s what happens at elections — so Councillors and MPs can get on with delivering improvements locally.

But do you want to leave it only to us? To the Council and Government? Do you want your influence restricted only to the election day? Many people don’t. And already get involved.

If you look at our vibrant voluntary sector, there are thousands of people making Kingston better. From Kingston Carers’ Network to the Citizens Advice Kingston, from our superb local Scout and Guide groups to Kingston Churches Action on Homelessness, people are working hard to help others in our area.

So I’ve been musing on how to break down the barriers, so more people can get involved — both in doing things and in helping to make decisions about what should happen.

And I’ve been impressed by 3 different experiments — from Iceland, Canada and the USA.

In Iceland, Reykjavik City Council wanted to let people generate new ideas for their neighbourhood, and then let the community decide which ideas were best. So they developed the concept of “Better Reykjavik” — an internet based platform, to allow citizens to participate more in ideas and decisions about their community.

In Better Reykjavik’s first 7 years, over 20,000 people used the platform — and 769 of the ideas proposed by residents were approved by the council. You can find an English language version of this at https://betrireykjavik.is/domain/1.

Then there’s Calgary, Alberta. Here the first Muslim Mayor in North America, Naheed Nenshi, launched his “Three things for Calgary” as part of his civic engagement. With echoes of Better Reykjavik, the aim is to allow residents to put forward ideas for improving something in their street, neighbourhood or city.

The main difference to Better Reykjavik is that Calgary’s three things are mostly three things people say they will do themselves. From picking up litter in their local park, to donating blood, from volunteering in the local YMCA to planting a tree. “Three things for Calgary” helps celebrate what people are already doing — and stimulates more (see www.3thingsforcalgary.ca).

Finally, there’s Detroit Soup (https://detroitsoup.com/). In their own words: “SOUP is a public dinner: for a donation of $5 attendees receive soup, salad, bread and a vote and hear from four presentations ranging from art, urban agriculture, social justice, social entrepreneurs, education, technology and more. Each presenter has four minutes to share their idea and answer four questions from the audience.

“At the event, attendees eat, talk, share resources, enjoy art and vote on the project they think benefits the city the most. At the end of the night, we count the ballots and the winner goes home with all of the money raised to carry out their project. Winners come back to a future SOUP dinner to report their project’s progress.”

In 5 years, Detroit Soup has had 95 dinners and raised over $85,000 for local projects. And it’s come to Britain. Now there are over 60 “soups” across the UK — raising money for community projects.

Is it time for a Kingston soup?

I know our Borough already has amazing people and groups doing different versions of this.

There’s the new SHEDx project in Tolworth that’s engaging the local community to take ownership of their unused and green spaces to help define and improve the future for their town. Visit SHEDx's website to see what you are missing.

There are wonderful residents now sponsoring the upkeep of their local train station in Berrylands, people clearing and making accessible the Raeburn Open Space, and people volunteering at local night shelters for the homeless over the winter.

And we have organisations like Kingston Voluntary Action and Love Kingston that exist to support and raise money for local charities and community groups.

Let me know by email at [email protected] or post at 21 Berrylands Rd, Surbiton KT5 8QX.