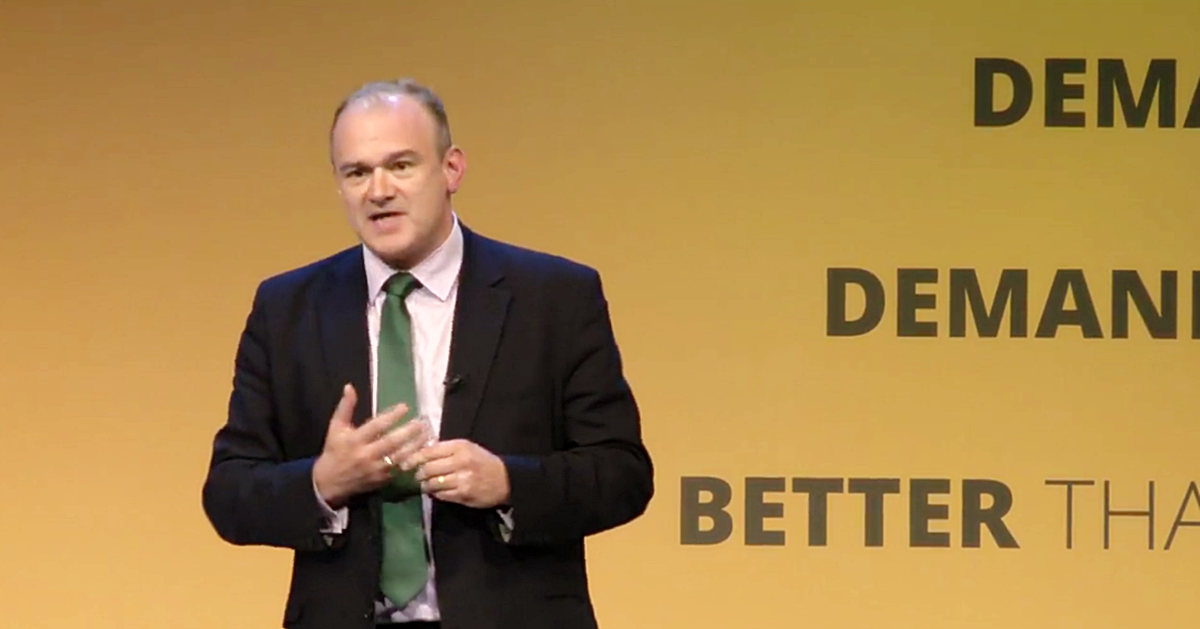 These are momentous times.

The economic earthquake of Brexit is already undermining the foundations of our prosperity.

And now there’s a genuine possibility one or both of the Conservative and Labour parties could split in the next year, in a political earthquake.

My argument tonight is, our party must be ready to save or salvage our country from these earthquakes.

In the current soap opera of Brexit politics, it is difficult to predict the next scene, let alone the next episode.

Some have even said – and this is far-fetched – but some are actually predicting that Boris Johnson might tell the truth.

But jokes aside, I just feel sorry for the people, the voters – whose concerns have been forgotten, as the big parties put party above country.

No-one voted for this chaotic Brexit. No-one said it would take so long. Or be so costly.

And the sense of betrayal caused by this Brexit chaos is why I believe there could now be a seismic shift in party allegiances.

With the tremors still to come, these feelings of betrayal and alienation could go off the Richter scale. As Brexit brings the whole house crashing down.

And, in that chaos, creates millions of politically homeless people. Demanding better.

Liberal Democrats, we must be seen as their new political home, ready to accommodate them, after the earthquakes.

Tonight we are a rally of radicals – people who are demanding better for our children, our elderly, our environment. Liberals who are instinctively open to people.

But will the growing multitude of politically homeless see us as their shelter, let alone their home?

My view is we have made a lot of progress in the last three years – but progress, that’s often gone unnoticed.

Thanks to Tim Farron and Vince Cable, we’ve positioned ourselves as The party against Brexit. The party leading the case for a People’s vote. And done far more.

For a start, we have a lot more of you and me – the members.

And thanks to members, we’ve done much better in council elections.

But don’t we want our progress to accelerate?

The chance of a once-in-a-lifetime shift in British politics is now.

We have to be ready, now.

When I speak to Conservative and Labour voters, many of them share our values. Like our policies. Many of them are liberal. Small l.

Our challenge is to turn those small l liberals into large L Liberals.

The next 12 months will probably be the best time in a generation, to win over these small l liberals, to our cause. Thanks to Brexit. Thanks to Corbyn.

Imagine. The possibility of millions coming over to support us. Of tens of thousands more joining us.

That’s why Vince is right to kick off a party reform debate.

We need to be bigger – much bigger.

And prepare now to become bigger.

Bigger – to win in areas of the country, where our party, now, is weak or even non-existent.

Bigger – so we can win, and stop Brexit. Win and fight inequality. Win and tackle climate change.

Like you, no doubt, I’ve got a few party reform ideas of my own – to add to the debate.

My first – give members new benefits.

If, after the membership consultation, we opt to share some of our existing benefits with a new supporter category, why not enhance the value of membership, to compensate. Make getting involved easier and more attractive.

My second idea – not a new one – get diversity right. We have made strides. But, particularly on Black Asian and Minority Ethnic representation, we have a long way to go.

In Kingston, over the last 10 years, we have celebrated our first Muslim Mayor. Our first Tamil Mayor. And this May the first ever Korean councillor. But we’ve still got work to do – as has the wider party – so we can be seen as the home of first choice, for the BAME politically homeless.

And here’s another idea: if reforming our party to allow more membership participation is good, what about the United Kingdom?

We should reform our troubled democracy, to allow more voter participation.

Move from representative democracy to a more participatory democracy.

Not direct democracy – which, as we’ve seen, can sometimes fall far short of the true demos.

Naheed Nenshi. North America’s first Muslim mayor. The Mayor of Calgary, Canada. He won power, with a digital campaign, based on voter participation that inspired.

And people did Demand Better, on Better Reykjavik – and are getting it. With their own ideas.

Conference, our party has a lot to be proud of.

We’ve called it right on the three big issues of our time.

How to stop the disaster of Brexit – we are calling it right.

We have an attractive story to tell the new politically homeless, hit by the earthquakes.

So let’s prepare them a place, in our home.

Let’s prepare for the possibility of an influx of liberals, coming home.

Let’s open up – and build a huge movement, to demand better for Britain.

Watch the video of the Rally